Six-year-old Ruby Moon has disappeared on her way to visit Grandma at the bottom of the cul de sac, and her parents Ray and Sylvie are desperate for her return, or for any scrap of information that could help. Throughout the play, the audience sees the Moons going door-to-door again, interviewing their host of unusual neighbours in Flaming Tree Grove, searching for any kind of clue to their daughter’s disappearance. Who knows what happened to Ruby? And who is leaving grim packages on the Moons’ doorstep? All is not as it seems, inside or outside the house, and the audience is left to draw their own conclusions about what happened.

Premiering in the same year as the high-profile without-a-trace abduction of Daniel Morcombe, Ruby Moon taps into a fear and a macabre fascination that remains prevalent in Australian households and society – media-stoked paranoia about our neighbours and who could be lurking on the other side of the picket fence, and the horror of a total stranger snatching our children away, never to be seen or heard from again. 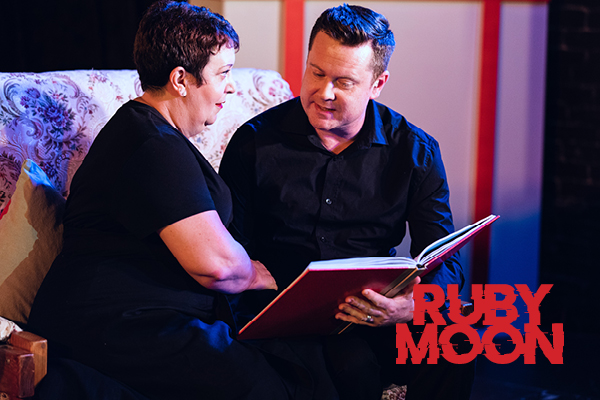 The set design brought the audience into the picture-perfect household of the Moons and the rooms of their various neighbours, held together by a strong colour scheme of black, white, and red that also extended to the actors’ costuming and was complemented by sound and lighting design by Bruce Noy.

Gary Farmer-Trickett and Sandra Harman gave gripping performances as Ray and Sylvie Moon, as well as the cast of eccentric neighbours who speculated about Ruby’s disappearance. The two actors created such distinctive characters through body language, facial expressions, vocalisation and basic costume changes it was possible to forget that it was only a two-person cast. Farmer-Trickett’s physical theatre was especially impressive, and the tension and shifts of power between the two actors was riveting. The actors remained onstage for almost the entire performance, with scene changes adding to the mounting suspense from the very first scene, including the rearrangement of props and onstage costume changes backed by the distinctive opening notes of Gary Jules’ famous cover of the Tears for Fears’ song Mad World.

MBTC’s Ruby Moon is an engrossing production, performed with great emotion and intensity by its stars; a gothic fractured fairy-tale from the heart of Australian suburbia dealing with grief, guilt, and the gut-wrenching purgatory of two shattered parents who find themselves waiting and wondering with no end in sight.

Ruby Moon is playing at NeverLand Theatre, North Lakes, until 8 September. For ticketing and further information, visit the MBTC website.