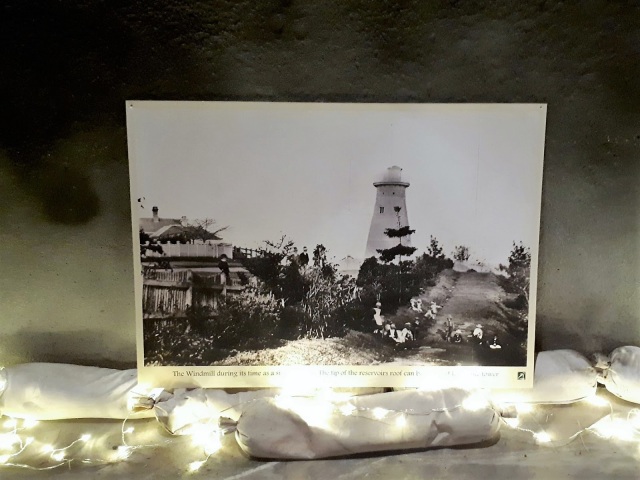 A delightful double bill hosted in the atmospheric venue of Spring Hill Reservoirs. Don a blindfold and descend into the dark of Brisbane’s convict past with Republic of Song, then put your powers of deduction to the test with InsideOutside’s interactive murder mystery.
THE BALLAD OF ROSIE QUINN
You’ve never heard a ghost story told quite like this. Republic of Song has created an intense experience that transports their audience to the hellish life of Irish convicts in the Moreton Bay Penal Settlement under the notoriously cruel Captain Patrick Logan.
The performance is a work of fiction and considers the forgotten women of the penal colonies – some of them not criminals themselves but transported with their husbands, or born in the colonies like Rosie Quinn. Sent from Paramatta to Moreton Bay to be with her mother, who dies a week before her arrival, Rosie is fortunate to work in the house of Patrick Logan, tending to his wife and children. But the military men are not as genteel as they seem to Rosie, and she may lose more than her innocence if she seeks the truth.
The work is rooted in research done by the show’s creators into Brisbane’s history, and is inspired by an anecdote of an infamous 1832 incident at the Female Factory, the women’s primary place of work and residence, in which sailors, officers, and convicts were found drunk in the women’s quarters. The subsequent inquiry into this misbehaviour discovered that there were hidden keys, and that the men gave themselves regular access to the women. The Ballad of Rosie Quinn imagines the extreme misogyny and sexual violence that these women may have been forced to live with, and asks whether they had any control over their fate as convict women, often dismissed as prostitutes, in a strange and infernal land.
The performance is presented in the round, with the audience seated between the archways of Spring Hill’s decommissioned reservoirs, and the voices of the actors and singers ring off the stone walls. Everything is bigger blindfolded, and the acoustics of the space allow the audience to hear clearly the directions of the voices, as well as the beautiful live music and sound effects used by the cast. Smell is also used, although the combination of all these sensory elements can threaten to become overwhelming – audiences are encouraged to lift their blindfold if they are feeling uncomfortable.
A deeply moving production, with such clever attention to detail in designing a non-visual show, The Ballad of Rosie Quinn is a chilling reflection on our history and the way that we remember it.
Content warnings: violence, sexual abuse. Recommended for 15+.
Please note: It gets quite cold underground, especially if you attend the double bill with Full Steam Ahead, so dress warmly. Unfortunately, there is no disabled access in this venue.
Republic of Song performed The Ballad of Rosie Quinn at Spring Hill Reservoirs on May 18-20 at 7pm. Review of May 20 performance.
FULL STEAM AHEAD
Inside Outside Theatre Company takes murder mystery parties to a new level with their interactive production of Full Steam Ahead, in which the audience is asked to gather clues, interview suspects, and decide who they think did it and why.
Audience members meet a colourful cast of characters as they witness the events leading up to the murder – a rich Duchess and her indulged niece and nephew; a jilted lover; a charming card sharp; and a Major in the British army.
Set around a train journey from England to Biarritz, France, in 1936, the performance brought up residual schoolyard rivalries, family tensions, unreciprocated declarations of love, and a missing suitcase. After they had witnessed the events prior to the murder, the audience was encouraged to form teams and pore over the clues, as well as interact with the characters, who were all suspects in the crime. As amateur detectives, we could also ask for assistance from the French Inspector/MC.
The performers did a fantastic job of staying in character and answering questions, as well as casual audience interaction and aside during the performance portion, although the fake accents occasionally made it difficult to understand in the echoing space of the Spring Hill Reservoirs. The archways of the reservoirs also worked well to invoke the arches of a London train station in the 1930’s.
It took a while to feel comfortable with the interactions, but by the end of the production all detective teams were talking excitedly, discussing their evidence and theories, and questioning the suspects carefully. The show concluded with the dramatic revelation of the true ‘whodunnit’, à la Sherlock Holmes, with the Inspector unravelling the motives and the murder by excusing the innocent until only one suspect remained, and the announcement of the team that had deduced the murderer and their motives correctly.
Very engaging and entertaining, Full Steam Ahead will let you put all the knowledge you’ve acquired watching crime shows to good use and have a great time with new people along the way.
Please note: It gets quite cold underground, especially if you attend the double bill with The Ballad of Rose Quinn, so dress warmly. Unfortunately, there is no disabled access in this venue.
InsideOutside Theatre Company performed Full Steam Ahead at the Imperial Hotel, Eumundi on May 11 and 19 at 7pm for 7.30pm, including a two-course dinner, and a promenade performance at Spring Hill Reservoirs on May 18-20 at 8.15pm. Read more on the event page. Review of May 20 performance.