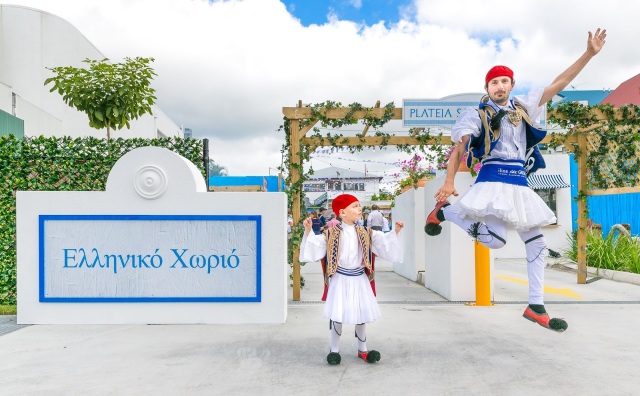 Where? Musgrave Park & The Greek Club, Edmondstone Street, South Brisbane
When? Saturday May 19 from 12 noon, & Sunday May 20 from 10am.
OPA! Next week’s Paniyiri Festival will celebrate the authentic flavours, faces, and culture of Greece, and Backstreet Brisbane has two double passes to give away! Head over to Backstreet Brisbane’s Instagram for your chance to win. 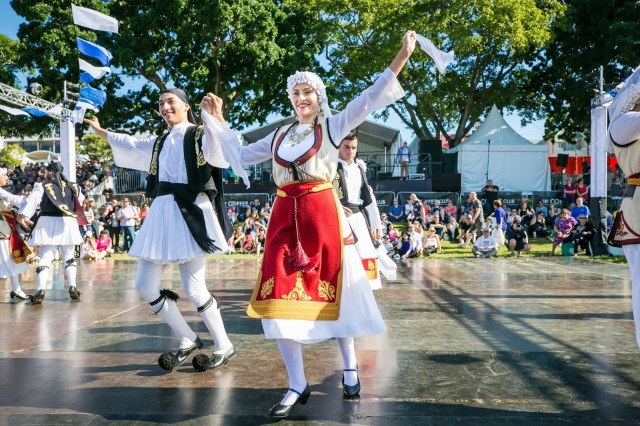 Since it began in 1976, Paniyiri has become Queensland’s signature celebration of all things Greek, as well as the country’s longest-running Greek festival. Beginning with a passionate group of Greek-Australians who wanted to share their cultural traditions with Brisbane, the festival has exploded and more than 60,000 people are expected to join the celebrations next weekend. Paniyiri is a community initiative of the Greek community of South East Queensland, and funds raised are channelled back into the community via the Greek orthodox Community of St George, Brisbane.

This year’s festival highlights include the Hellenic Dancers Showcase Program; the Coking Program starring the faces and flavours of Greece; over 30 food stalls showcasing the tastes, recipes, and secrets of food from all over Greece, from haloumi and souvlaki to honey puffs and dolmades; and dancers, singers, speakers, chefs, authors, and a variety of celebrity guests. There’s plenty for the whole family, including a free Kids Zone with arts and crafts, games, and dance lessons with the Junior Hellenic Dancers Group. If you’re left wanting more after the festival closes for the day, the official Paniyiri After Party will be hosted at the newly refurbished The Greek Club with beats from DJ Kossi.

Another special event will be the Greek Dancing with the Stars, which this year will include competitors Sophie Dillman and Patrick O’Connor from Home and Away, Josh & Brandon Jarius of 2018’s House Rules, and two lucky hit105 listeners, with the competition being judged by Channel Seven’s Tony Auden and hit105’s Stav Davidson and Matty Acton. 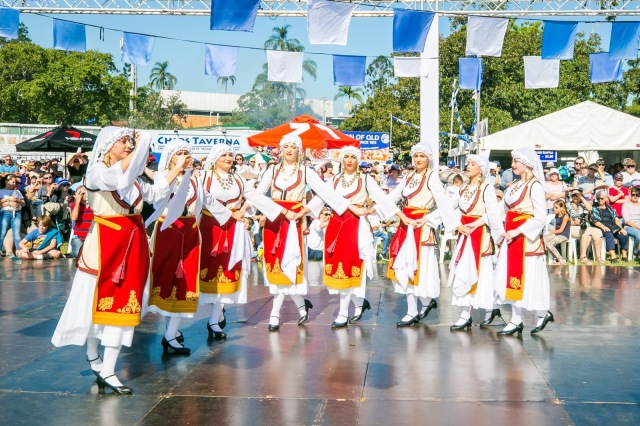 As part of the 2018 festival, Paniyiri ticket holders travel free network-wide on Brisbane City Council buses and Queensland Rail City Network trains thanks to a partnership between Paniyiri and TransLink (must present valid ticket when boarding, see website for details).
Tickets are available at the Paniyiri website – see you there!

Last night we were delighted to be at opening night of @thecuratorsbrisbane The Revolutionists. Big catwalk energy, lush costuming, bursts of song...a delicious performance of metatheatrical comedy juggling ideas of feminism, patriotism, and abolition, set under the shadow of the guillotine in revolutionary France and performed with striking, stirring passion by its skillful cast of four. My full review will be up on the blog soon 💃🗡👸🎤
This time last Friday 🍹🍹🌹🌹🧡🧡
The 'I Do! Wedding Stories fron Queensland' exhibition at @qldmuseum closes after this weekend - we really enjoyed wandering through (and ended up leaving right on closing) last Friday. It doesn't seem huge at a glance, but there is so much interesting detail to take in, from the artefacts and outfits as well as the written and spoken stories and the photographs...from forced marriages at Yarrabah mission to the first civil celebrant and drive-thru COVID-19 weddings in 2020, the exhibition spans more than 180 years of trends and traditions, events and evolutions in Queensland weddings and marriages. I'd definitely recommend it if you've got a few spare hours this weekend 💖
@laboitetheatre have kicked off their 2021 season with Naked & Screaming, a rapid-fire rollercoaster that seeks to explore the fear and uncertainty of new parenthood and to comment on the gendered aspects of physical and mental labour in parenting and domestic relationships more broadly. My full review is online now at @limelightmagazine and Naked & Screaming is playing at the Roundhouse Theatre until February 27, brilliantly performed by Emily Burton and Jackson McGovern 👶
Long weekend brunch trifecta ❤🧡💛
We were thrilled to attend the opening night of Our Town at @qld_theatre on Thursday - we laughed, we cried, we mulled over the play's messages on the way home. It was wonderful to see such a large cast on stage (one of the biggest I can recall seeing at the Bille Brown Theatre!) and to be back at full capacity - shoulder to shoulder and elbow to elbow applauding this wonderful play, this wonderful and emotional experience of live theatre.
Beautiful fresh dahlias from Mt Tamborine, from @kelvingrovevillagemarkets this morning 🌹💕 also came home with a pastry, pawpaw, and punnets of blueberries, strawberries, and lychees! 🍓🍓
🌻🌻🌻
This week is your last chance to see David Megaritty's tender and heart-wrenching family drama The Holidays at Queensland Theatre. An incredibly moving and visually delightful work about family, empathy, and memory, The Holidays explores the relationship between fathers and sons, and asks what we inherit from our parents and unwittingly pass on to our children. You can read my full review online at @limelightmagazine - this is a beautiful, beautiful piece of theatre and I'd highly recommend seeing it if you can 💙
It’s Day 12 of Backstreet Brisbane’s 12 Days of Christmas - the final day! Today’s a big one, focused on giving the gift of experiences. Check out the list on the blog now to find workshops and at-home making, tickets, season passes and subscriptions - gifts that keep on giving 🎁 🎁 🎁
There’s always plenty of champagne and six packs in our family fridge for Christmas (and usually heaps left over for New Year’s celebrations). Day 11 showcases some local tipples you might like to bring home to the family this year - full list on the blog now. Cheers! 🥂🍻
Day 10 is for the foodies! Holidays are so often centred around food, and it’s a great gifting choice if the people you love have enough ‘stuff’ in their lives – from locally made sweet treats to fresh produce, check out these local businesses for your food-loving loved ones! 🍫🍰🧀🥦🍉🍍
A great evening in great company! Last Friday night we had the pleasure of attending the final @qsorchestra Maestro concert of 2020, Beethoven's Emperor. It was my first time back in the @atqpac Concert Hall in almost a year (!!) and the concert was as grand as its name, a triumphant and stirring finale to an immensely difficult year. You can read my full review on the blog now 🎵🎶 thank you @kathrose for the invitation 💕💕
Day 9 of Backstreet Brisbane's 12 Days of Christmas is all about locally made gifts and goodies for the children in your family, whether they be two-legged, four-legged, or otherwise! 👶👦👧🐶🐱
Day 8 of Backstreet Brisbane's 12 Days of Christmas is about all things green ☀️🌿☀️ Check out the blog now to find gift suggestions for the green thumbs and plant mums in your life 🌱🌵🌳
Day 7 of Backstreet Brisbane's 12 Days of Christmas is a gift guide for the sewers and crafters in your life - if you're looking for something special for an at-home maker, check out the list of local businesses on the blog now! 🎀
Day 6 of Backstreet Brisbane's 12 Days of Christmas is a gift guide for locally made jewellery - if you've been following for a while, you know I love statement earrings! Read the full list of my favourite makers on the blog now, and recommend your own in the comments! 💎💍
Day 5 of Backstreet Brisbane's 12 Days of Christmas is about local apparel for the fashion lovers in your life 👚👕👗👢👠👞👒 Find it on the blog now, and drop your own faves (or your biz/brand!) in the comments! 🙏❤
It was a joy and a privilege to be back in the Bille Brown Theatre (at full capacity! sitting right next to strangers!) last night for the opening of David Megarrity's QPDA-winning play The Holidays by Queensland Theatre. Tender and entirely transportive, The Holidays is an incredibly moving and visually delightful work about family, empathy, and memory, packed with clever wordplay and beautifully balanced by moments of silliness and sweetness. I often cry in the moment, in the theatre, but rarely is a play so touching and close to home that I tear up again writing the review. Speaking of which, my full review of The Holidays is online now for @limelightmagazine and The Holidays is playing at the Bille Brown Theatre until December 12. Thanks for having us @qld_theatre and @kathrose 💕
Day 4 of Backstreet Brisbane's 12 Days of Christmas is a gift guide for local art you can eat off, drink from, hang on the walls to admire every day, and set on fire (in the case of hand-poured candles only!🔥) 🎨🖼🏡