I spent yesterday afternoon at the Sunnybank $2 Food Trail – it was my first time attending the event and, actually, my first time visiting Sunnybank at all. Open to the public from 2pm-8pm with $2 mini-meals from over 35 retailers, live music and other entertainment, I was surprised I’d never been before. I think I might have seen it advertised on Facebook last year but hadn’t paid much attention. Glad I went this year – it was, as the brochure claimed, ‘a self-guided foodie adventure’.

Started with a Grape Luscious iced tea from Easy Way Australia (it was a scorcher, even in the air-conditioning) then had crsipy vegetarian spring rolls straight our of the fryer at Lili’s Cuisine. The vegetarian ‘meatball’ from Yu Ping’s Veg House was interesting – much more gelatinous than I had expected, but very tasty. Everything was quite conveniently spaced, and on the way back toward the entrance I picked up some Japanese hotcakes filled with custard from Hot Cake House near the foodcourt. A tasty sweet snack. They also had a pastry called a Danish twist, which tasted very similar to a churro. 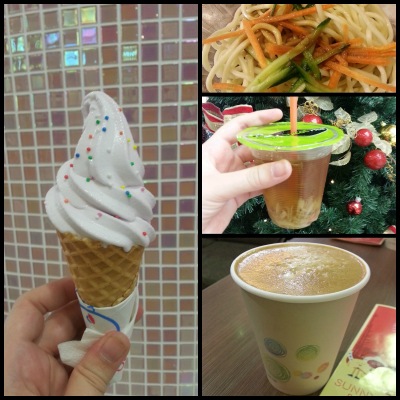 I had just found a seat with a BerryMe taro frozen yoghurt cone when the lion dance performance came in through the entrance. I’m always amazed by the synchronicity of lion dancers, and these were no exception.

Slowly sinking into a food coma, my next stop was cold noodles at Sonful Noodles. I was initially disappointed to hear that their vegetarian option was just the meat option with the meat taken out, but the noodles turned out to be really good. Having spent most of the day at Sunnybank Plaza, I headed over to see what Sunny Park had to offer. 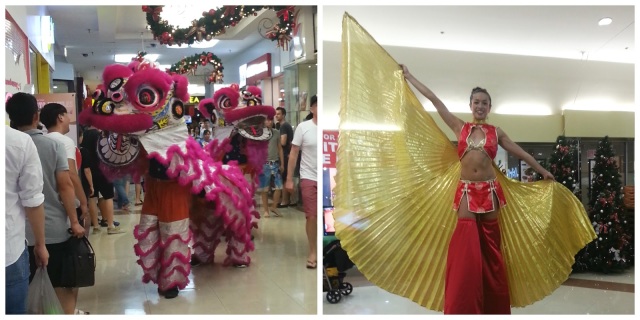 KafeCafe had great coffee and friendly service – they were nice enough to allow me to switch my coffee to soy milk (usually extra charge, not included in the $2 options). It was nice to sit down for a while, and admire the stilt performers who were passing the cafe.

I’d definitely recommend the Sunnybank Food Trail – feed the family for less than $20 (or even $10), or go on your own foodie adventure. Enjoy!